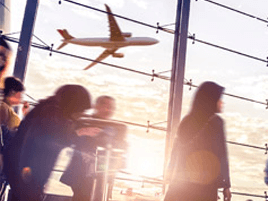 How to Launch a Hosted Phone System: The Park’N Fly Experience

Solutions that look obvious in hindsight can be difficult to achieve at the time. A business with eleven sites and hundreds of employees across shouldn’t rely on a 15-year-old Nortel physical PBX Phone system maintained by five separate providers with eight different accounts—it would obviously be better to have one Phone system operated by one provider, with the added benefit of one support number to call and one bill at the end of the month. But how do you get from point A to point B effectively?

Consider Park’N Fly, a Canadian airport parking provider with lots near major airports in places like Vancouver, Montreal, and Toronto. They offer valet, economy, and self-parking options, along with vehicle services like refuelling, detailing, and oil changes. But behind the scenes, Park’N Fly’s communications were a “rat’s nest of different telco solutions,” according to Dave Vanauken, their Director of Information Technology.

Park’N Fly wanted an internally hosted VoIP system by Primus for all eleven sites and all employees, who could number between 300 and 500 depending on the time of season. However, some of those employees had been with Park’N Fly for over ten years and were comfortable with how the old PBX system worked. Since it’s hard to convince employees—especially less tech-savvy ones—to change their habits, Vanauken decided that a gradual rollout of their new cloud-based phone system was essential.

Park’N Fly initially deployed their hosted PBX system at headquarters and their Vancouver location only. The initial period allowed for troubleshooting and let IT demonstrate to the rest of the Park’N Fly team that the new system was better than the old one. After that, they started rolling out site by site. An important part of making the change was running the old and the new phone systems in tandem. Phones were in place for months at each new location, with employees given the option to use the old or new system for internal and outgoing calls before eventually switching to the new system. This allowed employees who were frustrated by the clunky old system to see that the new system was better. Moreover, anyone intimidated by learning a new system just had to go back to using the old system briefly in order to realise that it would be less frustrating to learn the new one.

As part of the rollout, Park’N Fly also provided their employees with Primus Q&A literature and instructional material, but the main feature of the rollout was letting employees use two systems side by side and see that the proof was in the pudding. Change management is never easy, but the rationale behind the transition from one system to another was made clearer when people could use both systems and compare their experience.

According to Vanauken, Park’N Fly realised a 12-month ROI as a result of their shift to a cloud-based system: “The hosted PBX implementation was budget neutral with respect to our ongoing costs, so without any capital outlay, we essentially got a new system for free—it made good business sense. With all the set up costs and all of the initial roll out costs taken into account, we were able to break even within a year. It was a no-brainer.”

One system, one company, one help desk, one bill—no brainer indeed.

7 Buzzwords to Stop Using
How to Improve Your Business Writing, Part 2
Desk Phones Are Better Than Smartphones at One Very Important Thing
5 Business Continuity Questions Answered By the Experts
How a Merger Became an Opportunity for a Phone Upgrade