5 Ways Your Business Can Use Pokémon Go 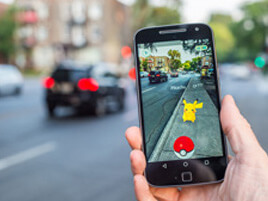 In July, a political first happened, although it went largely uncommented on. Hillary Clinton's campaign visited a Pokémon Go PokéStop in Madison Park (in Lakewood, Ohio), dropped a lure module, and then signed up hundreds of new voters who had turned up for a chance to catch Pokémon. If that isn't the most new media way of gaining new customers, we don't know what is.

Since it's launch in July, Pokémon Go has become a juggernaut in the world of apps. It is influencing where people shop, eat, and even live, and it has changed how large numbers of people move through cities.

Does that sound like hyperbole? Well, homeowners are noting proximity to PokéStops in real estate listings. Cities are asking for PokéStops because of real impacts on infrastructure. And some businesses are reporting up to a 75% uptick in business thanks to nearby lures.

How can you benefit? We have some ideas.

(Note: if you're new to Pokémon Go, you're going to want to check out our first article.)

1. Request a PokéStop or Gym for Your Business

Use the request form to try and get a PokéStop or Gym put near your business. Lots of players don't walk back and forth between different PokéStops all day; they're more likely to sit down with a cup of coffee near a PokéStop and play the game at a leisurely pace.

This tip goes beyond Pokémon Go, but it's good to mention here. Nobody is without a smartphone, so offering the two most needed smartphone amenities scores points with customers. And if you're offering WiFi and charging stations, be sure to advertise that fact.

3. Get Players to Tag Their Pictures With Your Business

The best thing that can happen to your foot traffic is someone capturing a rare Pokémon near you and then mentioning you on social media. Keep in mind that you can always invite over social media players to visit you, and you can even offer contests and prizes for the Pokémon Go player who captures the best Pokémon (just follow Facebooks rules on contests).

4. Take Pictures of Pokémon With Your Merchandise

An advantage of playing the game along with everyone else is you can take pictures of Pokémon when they appear in your store amongst your merchandise. Post those pictures online right away.

If you have a particularly large number of Pokémon go players near your business, film them or take a picture and post to social media. Lots of players means something good is nearby, and that'll attract more players. Like in this infamous video.

Even if the above tactics don't apply to your business, never fear. Pokémon Go is apparently going to start offering business advertising very soon, so you too can get in on this. We have one more tip though: play the game. It'll make your engagement a lot more authentic—and it's a lot of fun.