What To Choose Between Cable or DSL Internet? 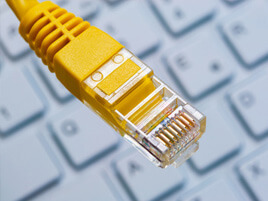 Battle of the internet connections: Cable vs DSL

If you are upgrading to a faster internet connection, one of the first things you will need to consider is whether you want cable or digital subscriber line (DSL) internet. Both types of connection provide high-speed internet, but this is where the similarities between them end.

Understanding the difference between cable and DSL will help you make an informed decision when upgrading your internet connection.

How does cable internet work?

Cable uses existing cable television lines to transmit digital data. Cable speeds vary depending on the provider, plan and location. Cable is widely considered to be faster than DSL, so if speed is your prime consideration, a cable internet connection is the way to go.

Historically, cable was seen as a less secure option because residential cable internet is provided using a shared line, which everyone in the neighborhood uses. Without security measures in place, this created the potential for information to be stolen. However, security is no longer an issue with modern cable internet connections.

How does DSL internet work?

As mentioned previously, both cable and DSL provide internet connectivity via modems, but the way in which that connection is made affects the speed, reliability and availability of your internet access. DSL typically accesses the internet using telephone lines - the copper wires that connect to the public switched telephone network (PSTN) - or fiber optic cables, which are usually laid alongside telephone lines and connect to a nearby street cabinet, which is known as fiber to the node (FTTN).

FTTN enables ISPs to offer download speeds of up to 50MBps, depending on the customer’s location and what plan they choose. While it doesn’t rival cable when it comes to speed, it’s plenty fast enough for more data-heavy applications, transferring large files, voice over internet protocol (VoIP) and video conferencing in HD, making it suitable for most businesses.

Depending on where your business is based, you may not have the choice between cable and DSL, as cable is not often available in remote and rural areas.

DSL is available much more widely because it uses the telephone network, which covers just about the entire country due to government mandate. While the presence of telephone lines doesn’t guarantee that DSL will be available, it’s certainly more widespread than cable, so may be your only option.

If your business is based in an area where neither cable or DSL is available, you might be able to get a satellite internet connection instead.

The truth about internet speeds

Again, depending on where your business is based, you may not get the download or upload speeds that providers advertise whether you opt for cable or DSL. That’s because the advertised speeds are ‘up to’ speeds - the maximum a plan can potentially deliver at any one point in time; this is known as ‘burstable’.

The speeds you actually get will depend on a number of factors. The main one is how far your premises are from the local telephone exchange, or anywhere else your provider may have installed their equipment on the line. Other significant factors are how many people in the area with the same provider are using their connection at any given time, the quality of wiring in your premises, and the device you are using to access the internet.

Cable speeds are also affected by the number of users sharing a connection; this is an uncontrollable factor for you as a user, and makes anticipating what speeds you will get at peak times impossible. However, this can be circumnavigated with a dedicated internet connection, which deliver guaranteed speeds, ensuring your business can anticipate a high level of performance at all times.

Your choice of internet connection should ultimately come down to what you want to be able to do online and your budget - you need to strike a balance between speed and price that works for you and your business. These vary from provider to provider, so take the time to compare plans, and any add-ons or upgrades you might need, and you will find the question of ‘cable or DSL?’ answers itself.

5 Reasons To Consider Dedicated Internet
What To Choose Between Cable or DSL Internet?
New protocol opens door to technology innovation
How to evaluate my internet provider
Business Ethernet Overview