Why Research & Incite Trusts Primus for Their Internet 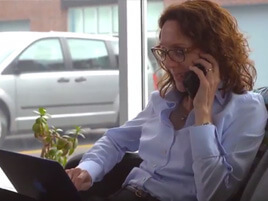 Research & Incite Consultants is a market research consultancy based in Toronto that focuses on uncovering the business implications behind market data. In serving its global client base, the firm relies heavily on telephone and Internet connectivity as the foundation for both research and client interactions.

Unfortunately, their old provider wasn’t providing speeds up to snuff—in fact, they were struggling with 2MB/s upload speeds. Speeds were an even bigger problem for employees who would try to work from home or work while travelling. On top of that, they had one system for their phones and another for their Internet. These were major problems for a company that conducted 80% of their surveys online and made extensive use of their phone lines for research and interviews. “For us, connectivity is very key,” explained Research & Incite president Mary Logan.

So, when Research & Incite Consultants moved to a new office, they decided to solve a few problems all at once. “One thing that we wanted to do was to combine those and just have one provider that offers us a high level of service and value for money as well,” says Logan. That’s why they approached Primus to sort out both the Internet problem and set up a new phone system, which Primus did by setting up a dedicated team to help manage the transition.

Now, the Internet is faster. 10MB/s uploads are the new standard, so employees can check their surveys faster. Staff can access their desktops from remote locations, access has improved, and everything flows more smoothly. The new hosted phone system has improved business as well. All the phones are super easy to setup. On top of that, their Primus bundle includes cable and DSL Internet redundancy. According to Stewart, “The fact that most of our work is done online means that if the Internet goes down, people can’t do their jobs. That’s why we have the second DSL connection—so if the first one goes down, we can switch it to the second connection.” Best of all, multiple systems are now on one bill.

“When I come into work on Monday I know that everything’s still going to work; I’m not going to be putting out any fires,” says Tom Stewart, IT Manager. “It’s really made my job a lot easier.”