Why Messaging Is the Future of Business-to-Customer Communications 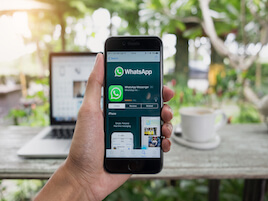 John Q. Customer has an issue with a concert ticket he’s purchased from an online store. He’s done the usual routine of click around the website for answers, skimmed the FAQ, and asked around his social circle for help. All to no avail. It’s time to contact customer support. Now imagine two scenarios:

Scenario A, which we might call the ‘traditional’ model: John calls the customer help line, waits a bit in a telephone queue, makes contact with a representative, reads off some information that identifies him, and finally gets to ask his question and get the help he needs.

Scenario B: John messages the online store through their Facebook page. He’s free to busy himself as he sees fit, engaging with the store every now and again, finally solving the problem without the hassle of a phone call.

If you’re scratching your head and wondering why on earth scenario B seems more enticing to some, you’re not alone. Lots of people don’t see the value in messaging over calling; in fact, when Radiolinja, a Finnish telecom, first introduced SMS messaging (i.e., texting) in 1993, it was considered a novelty.

Clearly, this is no longer the case. The under-40 crowd prefers text messaging and instant messaging not only for organising their social lives, but for business-related communication too. And on top of that, they dislike talking on the phone.

And that brings us back to John and his customer service issue. Consider the advantages of messaging instead of calling the business:

There’s no waiting on the phone. There are entire stand-up comedy acts about how tedious it is to be stuck in a telephone waiting room listening to smooth jazz. How long do I have to sit here with the phone at my ear listening for a response? Who knows? By messaging, John still has to wait for a response—but he’s free to do much more in the meantime.

The conversation can be passive instead of active. Speaking of doing more in the meantime, conversations over messenger have a more forgiving pace. If the customer service rep at the other end needs John to look up an account number or credit card information, John can do so at his leisure instead of asking the rep to hold before frantically searching for said information. Over the phone, there’s social pressure to keep a conversation flowing. Over messenger, no such pressure exists.

If you’re still not convinced that the future of B2C communications is messaging, look no further than Facebook’s purchase of WhatsApp for $19 billion. Facebook made the purchase because WhatsApp’s messaging service was a direct competitor to Facebook. But something else happened too. Shortly after the purchase, WhatsApp ended their annual subscription and made their service free. At the same time, they announced: “Starting this year, we will test tools that allow you to use WhatsApp to communicate with businesses and organizations that you want to hear from.” Nobody makes a $19 billion dollar bet on B2C messaging—unless they understand that it’s the future.