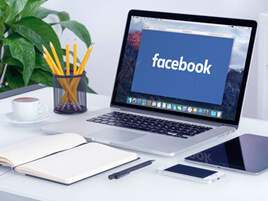 If your business bans Facebook (and other social media) at work, then it’s in the minority. One in five Americans can’t access Facebook from work, with other social media sites receiving less attention. That said, lots of employers have anxieties around social media. For example, look at the excitement caused by Pokémon Go last year. And for the record, we recommended a more pragmatic approach.

There’s lots of room between a complete ban and a completely laissez-faire approach. Here’s what you need to know.

This seems like a contradiction in terms, but in order to be productive, employees need to distract themselves from time to time. Facebook acts like a digital water cooler, allowing employees the chance to briefly recharge their batteries with a little social contact. In fact, at least one study has found that companies that ban social media are less productive than companies that don’t.

Not all experts agree though. In fact, some economists blame Facebook and other distractions for sagging productivity. Although, in fairness, they also blame companies for not investing in better tools for workers, such as “computer-aided machines and smarter workplaces”.

. . . And we aren’t just talking about marketing. Modern businesses are using chatbots to drive sales, replace call centres, and automate some HR tasks. Some of this work is happening over social media.

There’s something very paternalistic about banning access to social media—especially when there’s more going on than chatting. Twitter and Facebook feeds have become news sources for many if not most people, and besides, if you block social media on work computers, employees will just use their phones.

Earlier this year, a Peoria-area real estate agent got into a twitter spat with comedian Patton Oswalt and ended up mocking Oswalt’s recently deceased wife. The next day, he was fired. This is the flip side of how companies and social media interact. Someone’s social network includes the company they work for and a company’s profile is affected by their employees. To put it another way, an employee can Facebook at work, but work is on Facebook too—and work shouldn’t be put in an embarrassing position over what an employee is doing on Facebook and other social media.

The Internet can be a hateful place. And if your employees are operating social media in a corporate capacity and get harassed, you may be responsible for remedying the harassment. A 2016 ruling regarding the TTC Twitter account found that “the TTC failed to adequately protect employees and recommended dealing with the harassment by having the TTC ‘request the tweeters to immediately delete the offensive tweets’ and ‘advise them that if they do not do so they will be blocked.’” Sounds like a good policy to us.