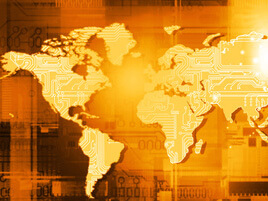 Long ago, a reliable Internet connection was a perk in the business sector; nowadays, it's instrumental to success. Things have changed a lot since the Internet first became a force, with giant technological strides opening up business owners to a variety of choices in how to hook their company location up to the World Wide Web. Here, we take a look at the evolution of Internet access products over the years and what options business owners currently have when it comes to creating an Internet connection.

Dial-Up connections were popular in the early to mid-nineties. These connections allowed entrepreneurs to link their computers up to the World Wide Web for the first time, opening up a whole new world for their business ventures, albeit at a snail's pace. With the Internet still in its infancy, the maximum transfer rate of the average dial-up connection was only about 56 kbps, which in today's world seems staggeringly slow. Dial-up connections first arrived in the form of bulky modems, which despite helping to popularize the use of the Internet soon became outdated. Their slow connection speeds weren't enough to handle user demands, and business owners in particular required a connection with a bit more pep (that didn't tie up telephone lines) in order to utilize everything the Internet had to offer.

After dial-up connections, Digital Subscriber Lines – commonly known as DSL connections – were introduced. These offered higher speeds and faster access to the Internet, with users hooking their DSL modem up to their computer by means of a cable. Whilst these connections were able to transmit digital data over telephone lines in a more powerful way, businesses with phones at their disposal still craved the ability to transmit voice technology – and that's where IDSN came in. Integrated Services for Digital Network or IDSN technology allowed digital data, voice and video to be transmitted through existing telephone lines. These connection methods are still used today, but often for personal use, as many bigger businesses soon switched over to technologies which better supported business applications.

T1 is part of the continuing evolution of digital access products. At one time, when many businesses relied on dial-up or basic DSL and Cable, T1 lines were the state of the art in speed and reliability.
A T1 line can provide digitized voice channels or a data connection. Used for telephone conversations, T1 lines carry as many as 24 voice channels. The line plugs in to the standard phone system. If you're using a T1 line for your Internet connection, you'll find that it carries data at a rate of 1,544 megabits per second. The T1 line connects to the network router and web server. A T1 line is much faster and more reliable than other connections and can easily support hundreds of users who are connecting to the Internet for general browsing purposes.

Modern T1 Internet lines are now typically a fibre optic cable, although originally they were constructed from copper. The tiny strands of optically pure glass in fibre optic cable are about as thick as a human hair. Fibre optic cables can transmit information quickly and efficiently over long distances.

Overall  T1 lines are a smart choice for secondary internet access with lower bandwidth applications that require a stable speed, for example VoIP.

Ethernet-based Fibre is the latest innovation in Internet technology, and one that businesses are increasingly turning towards in order to achieve optimum speed and performance when going online. It allows users to transmit Fibre Channel traffic across an existing high-speed Ethernet infrastructure, fusing voice and IP protocols onto a single interface. Considerably faster than T1 lines, Ethernet-based fibre connections are also often more expensive, and whilst there are benefits to them; T1 service  is an efficient and affordable way to upgrade your internet connection and should be considered a sound investment for your business.

As you can see, there is a staggering range of Internet connection products out there. Some are fast becoming obsolete, whereas others are flourishing. Overall though, you should find comfort in the fact that there's more than one Internet connection service on the market equipped to meet your business' needs. Take into consideration exactly what you want your company to achieve before you decide which one is best for you. Our customer service advisors will be more than happy to guide you in the right direction, answering any questions you may have about Internet connection products and your business.