How to Be a Better Listener 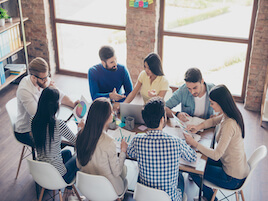 We know what you’re thinking. You’ve probably attended at least one workshop with a smiley bearded guy who hugs everyone, talks about the power of listening, and hands out stickers. Maybe he wallpapers his house with motivational posters.

This article isn’t that. No you-can-do-it motivational pabulum here. This is all practical. We all know listening is important. If we’re honest with ourselves, we know we can probably be better at it. So here are five strategies to be a better active listener.

Stop Thinking About What You’re Going to Say Next

Many of us plan out what we’re going to say next in a conversation. It seems efficient. After all, it’s good to think about what you’re going to say before you say it. However, thinking about what you’re going to say while the other person is speaking prevents you from listening. The psychologist Arie Kruglanski has done research that suggests there are thinking mindsets and doing mindsets. It’s normal to use both throughout the day. However, when you plan out what you’ll say next, you’re using a doing mindset. Instead, don’t plan. By adopting a thinking mindset, you can focus on what the other person is saying. Besides, by doing this, your part of the conversation will be more relevant.

Have a Goal: Listen to Learn

It can help to take a goal-oriented approach to listening. Tell yourself that you want to learn X, Y, or Z, and you’ll listen more intently. You goal can be as simple as “I want to understand Chuck’s concerns” or “I need to understand Padma’s approach to this problem.”

If someone is trying to tell you something important or complex, repeat back what they’ve said. Try “So what you’re saying is . . .” or “If I understand you correctly . . .” This lets the other person know that they’re being heard, but more importantly, it gives them the chance to correct any misapprehensions you have. Part of listening is being open to the idea of being wrong and giving the other person the opportunity to help you be right.

We know. That sounds terrible. But keeping score can be helpful, especially on a conference call or in a meeting. You’ll have to be surreptitious though. Make a list of all the names of everyone participating. Then put a tally mark every time someone speaks up. If you’re spending too much time speaking, you’ll be able to see it right away. Added bonus: you’ll also see who isn’t speaking up, which tells you that you should solicit more of their opinion.

Why You Need Two-Factor Authentication
10 Strategies for Surviving a Conference Call
Hosted vs. On-Premise PBX
LA-Z-Boy
What to Do if You Have Trouble Speaking Clearly on the Phone