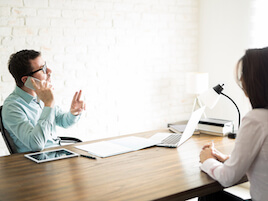 Calling From an Inappropriate Location

This is the age of virtual teams and we love it. But do you know what threatens our dream of working from home? People who call in to meetings while they’re clearly somewhere not appropriate for a call. Like where? From a busy coffee shop, from a loud street corner, from what sure sounds like the bathroom. Gross.

How to deal with it: use polite confrontation. “Hey Tim, do you need us to call you back at a better time?”

Calling for Information and Not Being Prepared

You answer the phone, but the caller says, “Hold on a sec.” Are they getting their headset sorted? Taking you off speakerphone? Finishing a conversation with the colleague next to them?

How to deal with it: if it’s an occasional offense, don’t sweat it. If the caller is eating up your time looking for a pen or figuring out their equipment, tell them to call back when they’re more prepared.

How to deal with it: make a small meeting room or something similar available to people who need to put their caller on speakerphone, for whatever reason.

You’re chatting away with a client, mention something in confidence, and then you hear a snicker in the background. Wait a minute—were you on speakerphone this whole time?

How to deal with it: be direct, “Did you put me on speakerphone without letting me know?” Also, slightly beside the point, remember that it’s easy for something said in confidence to reach a wider audience.

Bedtime routine interrupted by a routine request from someone who knows exactly when you’re available for work hours? That’s pretty high up there on the rudeness scale.

How to deal with it: a chronic after-hours caller should be confronted, but you can avoid all but the most persistent caller by using the do not disturb feature on your smartphone. Smartphones can filter calls during hours you designate, and you can also put specific numbers on a whitelist. Some smartphones can also be programmed to allow calls through if there are multiple calls from the same number in a short timeframe, which might suggest an emergency.

You get it, things can get heated. But it’s hard to tolerate someone who yells, swears, or is otherwise boorish over the phone.

How to deal with it: shut down rude behaviour ASAP, or your rude caller will just keep at it. Say, “We can continue this when you’ve regained your composure.” If that doesn’t work, it’s worth escalating to your supervisor. If this person is a client, it may be time to reconsider their business.

Dealing with frustrating, rude, or otherwise obnoxious workplace phone behaviour isn’t pleasant, but if you’re direct and polite, you can resist most breaches of etiquette.