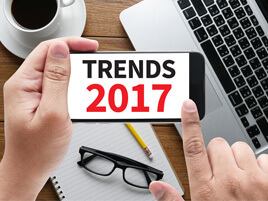 Social media changes so fast that maybe it seems a little foolhardy to make predictions. But major changes are gathering strength, and if your business is to be prepared for 2017, these are the things you’ll have to take into consideration.

Lots of businesses still think of social media as primarily about marketing. That isn’t true anymore. Customers are not only learning about new products through Pinterest and Instagram, they’re buying stuff there too.

Back in 2005, people laughed when the video game Everquest II let players order a pizza by typing in an in-game command, “/pizza.” Jay Leno called it “pathetic”, ESPN anchors laughed about doughy digitally-addicted gamers, and even Everqeust II players worried about what it meant for the game.

Now, you can order Dominos anywhere and no one bats an eye. You can text, use messenger, your smartwatch, tweet them—really, anywhere. Expect more and more businesses selling directly over social media.

Lots of people don’t like over-the-phone customer service. Actually, they dislike waiting on the phone and listening to second-rate jazz interpretations of hit songs from 1994. Perhaps that’s why more and more people are contacting companies over Facebook to resolve service problems. 45% of people would rather message than use email, and 49% would rather message than use the phone. Combine that with the fact that people want businesses to be available 24/7, which Facebook is, it’s no surprise that lots of customers expect service over Facebook.

Rise of the Chat Bots

Speaking of customer service over Facebook, a lot of this has been supported by the growth of chat bots. Facebook added over 11,000 chat bots this year; expect more, given that 23,000 accounts have been created for Facebook’s bot engine development tool. Most common interactions people have with customer service (think: “Hey, when does the technician get here?” or “I’m having a problem with my bank card . . .”) can be handled by bots, and some experts think that the bot economy will be as large as the app economy. Of course, those interactions happen over Facebook.

Major Action on the Troll Front

Social media can be a pretty brutal place. Here’s one example out of thousands: Leslie Jones quit Twitter after a barrage of racist and sexist tweets while the internet was in a juvenile meltdown over Ghostbusters. Unsurprisingly, the frequently hostile climate on social media is pretty inhospitable to most users and businesses, so it looks like 2017 is the year major companies start improving things in a big and meaningful way. Twitter has given users some anti-harassment tools, and they’re working on tools to combat hateful language. Meanwhile, Reddit is actively combating its most toxic communities. In 2017, the most successful platforms will be the ones that combat their trolls the most forcefully.

And remember, this year the government decided that companies are sometimes responsible for protecting their employees from social media harassment. Maybe the old axiom about not feeding the trolls is true, but it’s also true that businesses can no longer ignore them.

We think of social media as fleeting, but for lots of users, the problem is that it sticks around. There’s a reason Snapchat is so popular amongst teens: you have 30 seconds, then the picture is gone. This year, Instagram moved to copy the format with Stories, which has proven quite popular.

What’s driving the trend? For one thing, social media feeds are full of too much stuff. For another, some social media users don’t want their posts sticking around forever. Businesses can take advantage of the idea of expiration to promote urgency in their digital marketing; if users know they have a limited time to look at posts, they’ll be more likely to click.

10 Small Business Trends for 2018
Reducing Stress With Simple Tricks
7 Buzzwords to Stop Using
Understanding T1 Lines: What You Should Know
The Communication Problem Modern Businesses Face (And How to Solve It)