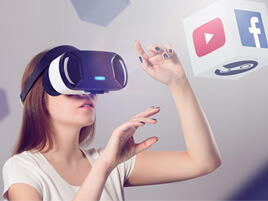 What does the future hold? We aren’t claiming to predict everything, but some trends are too large to ignore. Things like virtual reality used to be gimmicky and things like deep machine learning used to be too abstract to really impact most businesses, but they will come into their own in 2017. Here’s what you can expect.

When Amazon announced Amazon Go earlier this month with a video that promises you’ll be able to walk into a grocery store, scan your phone, pick up whatever you want, and just walk out, two things happened. One, the news media couldn’t contain it’s excitement. And two, tonnes of people wrongly speculated that a system of RFID tags and scanners would make it possible.

But that’s only part of the story. The other part involves computer vision and deep machine learning. Employees aren’t watching what you’re picking up; the store is. Amazon will be using deep machine learning to match your Go account to you as you walk in the store, record what you pick up, deduct what you put back, and charge you when you leave. And this isn’t limited to Amazon. Expect computer learning to become the new normal in 2017.

It seems like every week has seen someone announcing the “Uber of insert industry here.” Another new normal in 2017 will be the end of waiting. Wait for food, pharmaceuticals and toiletries? Nope, not anymore. Not with apps on our smartphones promising instant delivery of anything we want.

Oh, and enter Amazon once again. Their introduction of Dash buttons and two-hour delivery in more and more markets means businesses who traditionally haven’t had fast delivery services, need to think about getting their products to customers as fast as possible.

2016 was the year that virtual reality (VR) and augmented reality (AR) stopped being overly-expensive gimmicks and started becoming consumer realities. AR game Pokémon Go became the year’s monster hit, while Vive and Oculus Rift are in an arms race for the favour of PC gamers.

Not that early-adopters are keeping VR to themselves; lots of tech evangelists are getting their grandparents in on the VR craze and uploading the results to YouTube. It’s entirely possible that VR and AR will be the same kind of cross-generational hit that the Wii’s motion controls were, but the amount of media that can be created for and number of companies that can be involved in VR and AR is substantially larger.

We’re going to close on a trend that surprises no one—but it’s the biggest trend of which businesses need to be aware. The robot journalists are here. So are robot lawyers. Robots write songs, they drive trucks, they trade stocks, they treat lung cancer. Every business needs to start figuring out what part of their processes can and can’t be automated, then ask which of those parts that can be automated should be automated. Sobering? Certainly. But this is where 2017 is taking us.

7 Best Gadgets for a Business Traveller
Server co-location: outsourced or in-house?
5 Common Social Engineering Tactics Used by Attackers
How To Select An Efficient Conference Call Service
Strategic in IT