10 Strategies for Surviving a Conference Call 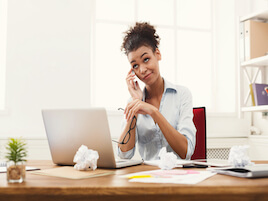 In a previous article, we discussed rules for hosting a good conference call. That is, the kind of call that puts everyone on the same page.

However, if you’re participating in a call that someone else is hosting, you need a different set of strategies to make the call successful. Here they are.

If you’re using a smartphone, an hour or so before your call, make sure it’s updated. The last thing you want is your phone to start installing a new OS five minutes before you’re due to discuss end-of-quarter financials.

Use the Clearest Line You Can

You don’t want to be the one on the line with a bad connection. Remember, desk phones are better than smart phones when it comes to clarity. It may also help to use a microphone or a headset.

If you’re unsure exactly why you’re on the call, speak to the host before hand about what exactly they want you to bring to the table.

Use the Bathroom Beforehand

At least half an hour before your call, hit the bathroom. You don’t want the urge to strike you a few minutes before your call is scheduled, or worse, in the middle of the call. There are a few ways that can play out and none of them are good.

Call the dial-in a few minutes prior the beginning of the call. That way you’re ready to go. Not more than a few minutes early though; you don’t want to waste your time or being stuck making small talk with someone you don’t know that well.

Use the Mute Button

If you’re stuck somewhere noisy, if you have a cold, or otherwise have a volume problem, use the mute button when you aren’t speaking. Just let other callers know that’s what you’ll be doing.

When you join a call, introduce yourself immediately. You may think it’s rude to interrupt, but it’s more rude to let two others chat for several minutes without letting them know that a third party is listening.

There’s always one guy droning on and on during a conference call and everyone hates that guy. Don’t be that guy. Use short, declarative sentences, make the points you want to make, and don’t provide a lot of additional colour commentary. If it helps, make some brief notes ahead of time.

Multitasking isn’t so much getting two things done at once as it is screwing up two things at once. Pay attention to the call.

You may get stuck in a conference call that is badly moderated, too long, or otherwise terrible. However, if you let your attention wander, you may get called upon without knowing what’s going on and end up contributing to the confusion. So here’s a strategy for dealing with boring conference calls: take longhand notes. They can be as funny or sarcastic as you want. Include doodles of stuff you’re discussing. This way, your mind is occupied but you stay on point.