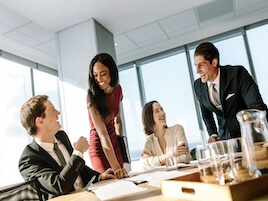 Businesses thrive on clear and effective communication. Buzzwords stand in the way of said communication. That’s why you should eliminate these seven buzzwords from your life.

Back in 1997 when Clayton Christensen wroteThe Innovator’s Dilemma and coined the term ‘innovative disruption’, the word disruption took off. It helped that it had a specific meaning: a new technology can upend and destroy an old business model. Old timey example: someone invented refrigerators and the North American ice trade collapsed.

When a word starts to mean anything, it means nothing.

Such a vague way of saying ‘contact me’. Why not ask for a meeting, a message, or an email? Or better yet, just offer to call. Phone calls are underrated.

If you aren’t customer-centric, what are you? Out of business in six months?

If the word ‘utilize’ has a purpose, it’s to make writing more dense than necessary and to expose those who frequently use it as pretentious. George Orwell said to never use a longer word when a short one will do, and this is certainly the case when it comes to ‘utilize’ versus ‘use’.

Of course, when it comes to science writing, ‘utilize’ has a specific meaning. Everyone else should stick to ‘use’.

Extra note: People who are actually influential rarely need to call themselves influential. Something to keep in mind for updating LinkedIn.

Think Outside the Box

But there’s something more sinister about the whole idea of ‘thinking outside the box’. It sets up the idea that ‘in the box’ thinking, that is, ideas that are boring, traditional, or expected, aren’t good ideas, while ‘outside the box’ thinking, that is, ideas that are innovative, unexpected, or weird, are good ideas. But that’s silly. Sometimes boring ideas, like inviting in outside auditors or setting up off-site back-ups are excellent ideas. And sometimes ‘outside the box’ ideas, like marketing soft drinks to breakfast eaters or a toothpaste company selling frozen dinners.

Going forward just means ‘in the future’, which is a phrase no one really needs to use. The future is the only time anyone can do something. Telling someone to do something ‘going forward’ just rules out doing something in the past. Compare:

“You should cc me on invoices.”

“You should cc me on invoices, going forward.”

See what we mean?