5 Business Situations That Should Remain Phone-Free 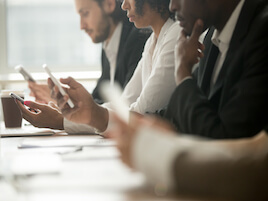 There are a handful of situations at work that don’t need phones or don’t benefit from them. They’re few, but they’re worth talking about.

If there’s one thing that phones (or an internet connection) don’t help, it’s creativity. Whether you’re coming up with mind maps, playing word games, or doing some role play, phones don’t really contribute to creativity in the room. In fact, this has been studied. Creativity needs boredom and focus (amongst other things), and phones are machines built to slay boredom and interrupt focus. So, when planning a brainstorming session, leave your phone behind.

Lunch with colleagues, clients, and bosses mix business talk with more informal chat. It’s useful to get some stuff done while doing the get-to-know-each-other dance that improves networks. Phones aren’t a great addition to this mix. There’s already a prop to busy yourself with—i.e., the food. You can change gears between business talk and more informal stuff. A phone is both a distraction and a little rude to the person you’re supposed to be speaking with. If you’re eating with a group of phone-addicted colleagues, consider making a phone stack. That is, everyone stacks their phones on the table and the first one to answer a notification pays for the meal. If everyone makes it though before the end of the meal, everyone pays their own way.

Some topics are sensitive. Discussions about pay, future employment, or anything that demands the presence of HR probably won’t benefit from the presence of a phone. For one thing, you never want to give even the slightest hint that someone talking about something sensitive is being recorded. For another, sensitive topics demand the full attention of everyone in the room. Put your smartphone away and silence your desk phone at the start of a sensitive conversation.

Even if the presentation you’re watching is boring, uninformative, running far longer than it should, or otherwise a waste of your time, don’t give into temptation and start playing with your phone. Not only is it rude to the presenter, but others in the room may judge you for your actions. Here’s a tip: with a pen and a small notepad, you can take notes. This will make you less bored and still look good to others in the room.

Unless someone is dialling into you meeting remotely, there probably isn’t a good reason to bring your phone to a meeting. It’s important to fully engage with the meeting’s subject. If you or others are using phones, then you either aren’t fully focused or the meeting isn’t as well organized as it should be.

Of course, there’s a major exception to all of these situations. If you’re waiting for specific, important news, like test results from a doctor or confirmation that your child’s has arrived safely at their grandparents after a cross-country flight, let your colleagues know that you’re expecting an important call and that you may be interrupted. Things that don’t approach this level of importance probably don’t merit the interruption.

What Features Your HPBX Phone System Should Have
9 Rules for Good Workplace Email Etiquette
Is Cloud Telephony Right For You?
14 Rules for Running a Conference Call
Creating a Professional Voicemail Greeting