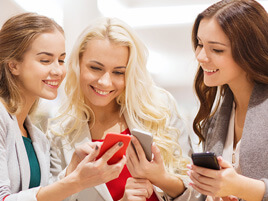 It is important to be on the same platform while engaging customers. In 2017, customers are spending more time watching video content and sending messages using popular apps. Now is the perfect time to increase usage of these apps to keep customers informed and engaged.

Short videos are leading engagement right now. How short? Millennials (and the younger Generation Z) prefer ten seconds and under, which is bad news for companies stuck making traditional TV-spots, but great news for companies willing to take risks on digital content. Ten seconds is a tight timeframe to make your point, but keep in mind that it’s better to have a focused message anyway. Also consider that Microsoft did a study two years ago that found that digitised brains only have an eight second attention span. If you’re skimming this post, we think you’ll agree.

Your business is already on Facebook, so the next logical step is to start using Facebook Live. Video content and interactivity are both major tools for customer engagement, so it’s natural that they’d come together. You broadcast video content live over Facebook, your customers get notified when you go live, and they can react and comment in real time. It’s also worth pointing out that Facebook is championing live pretty heavily right now, so chances are their algorithm will be giving Live content a boost in users timelines.

Here’s what’s nice about CLIENTpulse: it’s simple, clean, and automated. You add your clients to CLIENTpulse. It creates its own small, simple surveys, which it sends to your clients. Then it collects the data, organises it in a clean manner, and you get to see trends and figure out which clients need more from you. CLIENTpulse is particularly handy if you’re in an industry or region where people tend not to speak so bluntly to each other. For some people, it’s easier to speak up in a survey than in person.

People spend more time on messaging apps than social media. That isn’t an opinion, it’s a fact. But it isn’t bad at all—some of that time is still spent engaging with brands, consuming content, and shopping. That’s why it’s important to engage with customers via Messenger (or another messaging app—but the nice thing about Messenger is it’s attached to your company’s Facebook page). Keep in mind that you can create a bot for Messenger to help you out.

Instagram Stories has been popular amongst Instagram users since it launched last year. And now that Instagram Stories is available to all businesses, globally, as of March 1, smart businesses are getting in on the act. Airbnb did a series of fifteen-second videos for its’ new “experiences” service; it’s worth looking at to see what’s effective on Instagram Stories. And in case you’re wondering if all this short, to-the-point video content is effective, Airbnb found that their Stories campaign had a “double-digit point increase in advert recall”.

Small Business Phone Systems On A Budget
6 Tools to Help You Create Your Own Chatbot
What is PCI Compliance
Choosing a technology partner
Where are your servers?