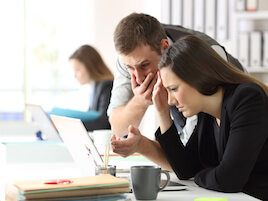 According to Carleton University, the average Canadian worker spends around a third of their time reading and answering email. That makes improving your email game worthwhile, so make sure you stop making these four mistakes.

Make this your mantra: dance like no one is watching, email like it may one day be read aloud in a deposition. That comes from Olivia Nuzzi, a journalist known for covering the Washington DC political circuit, which includes its fair share of email scandals. At the heart of all said scandals: people saying things in email that they wouldn’t in public.

Your email is not private, especially not your workplace email. Putting aside the fact that your IT department can likely see everything, your email may become public for a number of reasons. Maybe it’s necessary evidence in an HR problem or even a lawsuit. You don’t even need to be the subject of such an inquiry for email you write to end up as evidence.

Of course, there’s an even easier way for what you say in email to go public: the person you email might forward it to the wrong person. So treat your workplace email as a public record.

Your email subjects should be as specific as possible. Not only is it telling the recipient what to expect, it will help your recipient find said email in the future. “Report” isn’t as useful as “Report 16-B”, especially if you’ve also sent reports titled Report 16-A, Report 15-B, etc.

Mistake: Emailing When a Call (or Face-to-Face) Would Be Better

There are some cases when a phone call or a face-to-face meeting is better than an email. These include:

When the topic is sensitive. Anything that you might call an HR issue probably needs a face-to-face. It’s a matter of respect as much as communication.

When the issue is urgent. We’re amazed at the number of times we’ve seen someone send an urgent email and then do something other than call. We’ve seen people wait and let the issue become a catastrophe, email the recipient’s supervisor to complain, and even take action without whatever important thing they needed from their email recipient. All these things could’ve been avoided with a call. If it’s really urgent, call.

When you’re worried about tone. Maybe you think the person you’re emailing is coming across as a little angry or rude. Or maybe you’re worried that you’re coming across that way. That’s normal. Written communication loses all the verbal cues we rely on, like intonation, never mind all the nonverbal cues we lose too. If you think that the email you’re reading (or writing) seems angry, call.

Remember, you can always send a follow-up email after these conversations to create a record of what was said.

If every email is urgent, none of them are urgent. If your email software allows you to flag emails as urgent (or starred, important, or whatever) consider carefully whether or not to take advantage of that feature. Frankly, if something is really urgent, call.

How to Make Meetings More Productive
The Continued Shift to Telecommuting: What It Means For Your business
How to Improve Your Business Writing, Part 3
10 Small Business Trends for 2018
What To Do If You’ve Suffered a Data Breach